Home / About Us / Commitment to Mission and the Neighborhood 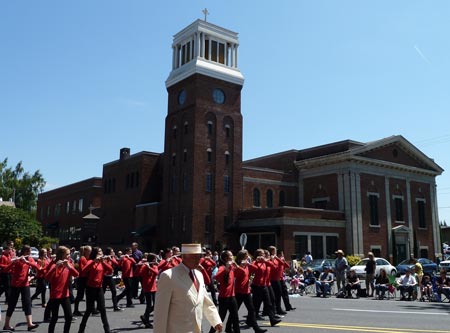 A long time partner with local organizations, we were the location for over 40 years for the Meals on Wheels People’s Loaves & Fishes senior dining program in the Hollywood District, and have co-sponsored with the Hollywood Lions bi-annual Red Cross blood drives. For the past 20 years, Rose City has been active supporting Habitat for Humanity through builds, sponsorships and donations.

From 2015 until the organization’s close, we participated in HOMEpdx’s outreach efforts, bringing meals six times a year to people living in need downtown. We currently provide meals for the Wy’East Veterans’ Shelter on the first and fourth Fridays of the month, and are ramping up a bag lunch program for the new Bybee Hope Center.

Environmental Stewardship at RCPPC began with plastics recycling in 1990, before curb-side recycling became standard in the city, and continued with a battery recycling program, as well as donations to the Community Warehouse and the Climate Trust. Currently, our Environmental Task Force is studying options to enact the church’s theme for 2020-2021, God’s Call: Just World, Green Earth.

In 2004 the church began a period of study on the issue of full inclusion into church life and membership of people who identify as LGBTQ. Through a process of education and conversation, the congregation has evolved into a welcoming congregation with membership in the Covenant Network of Presbyterians. We welcome all people regardless of race, nationality, class, gender age, or sexual orientation and pledge ourselves to the reconciling work of God and Jesus Christ. Read more about our commitment to inclusivity here.

The church was the organizer of the first Rose City Park neighborhood children’s parade in June 1925, which ultimately developed into the Junior Rose Festival parade.

Where to Find Us: